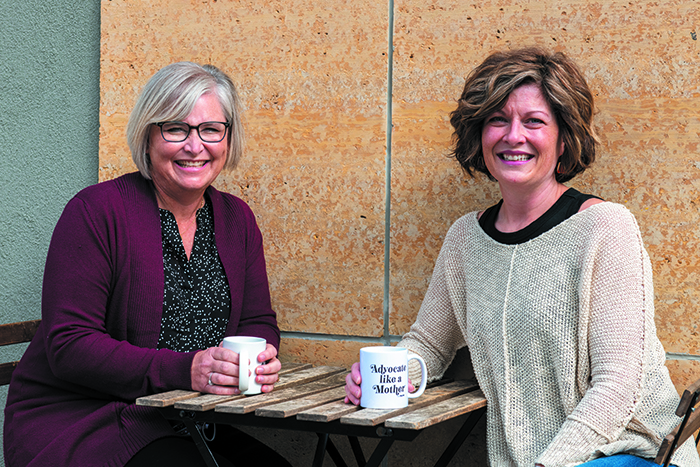 We wanted women to feel the power of giving.

“And to think it all began over a cup of coffee.”

This is the tagline on the emails from Women’s Giving Circle (WGC) leaders Laura Stevens and Melanie VanRoekel, and it speaks to the power of a single conversation between two friends looking to make a difference in their community.

Indeed, it was a simple cup of coffee that brought Stevens and VanRoekel together at the Coffee Hag in the fall of 2018. The two women chatted about their kids, families and work, but soon the conversation shifted to giving back to a community they care about. Stevens had attended a conference the previous year focused on women in philanthropy, and she still had a pamphlet from the event, which explained the concept of women’s giving circles. VanRoekel took the pamphlet home, did some research and soon called Stevens to say, “I get it. I love it. Let’s do it.”

And thus, the Mankato WGC was born.

Giving circles are designed to create power in numbers. Through regular contributions, giving circle members are able to generate a large pool of funds to grant to nonprofits in the community. The members nominate deserving organizations and then vote on the groups who will receive the funding.
For Stevens and VanRoekel, it was clear from the start they wanted their giving circle to amplify women’s philanthropy.

“There are not a lot of women’s voices brought to high-level philanthropy decisions, and we wanted to change that,” VanRoekel said. “We also really wanted women to feel the power of giving and to understand that you don’t need a million dollars to make a difference.”

Having served as a Mankato Area Foundation (MAF) board member, VanRoekel knew their first step toward making the WGC a success was to partner with MAF.
“I knew the Foundation would be a perfect partner, so we met with Nancy [Zallek] and the team and asked if they could support us,” VanRoekel said. “From then on, the process was seamless.”

“Having MAF as our partner made everything easier for us,” Stevens said. “MAF is the go-to group for philanthropy in Mankato. Aligning with the Foundation gave us credibility, resources and connections we would never have had otherwise.”

By the spring of 2019, the WGC was up and running. Through grassroots efforts, networking and utilizing MAF’s connections, the WGC reached a wide audience and attracted a variety of women to jump on board.

“We had a fear that people wouldn’t embrace the idea or understand the impact of it,” VanRoekel said. “But, Mankato women always
show up.”

Soon enough, there were 100 women in the WGC. “We made sure this was accessible to as many philanthropic women as possible,” Stevens said. “We didn’t want the members’ charitable contributions to be a financial constraint, so we created an option for women to pool their resources together to create a team under one membership.” Individuals or teams commit to a $125 contribution per quarter (or half that amount for women under 40).

Every quarter, WGC members have the opportunity to nominate a local nonprofit organization focused on serving women or children to receive a grant from the group’s pooled funds.

After the nominations are collected, each member or team gets to vote for their favorite, and the top three ranking organizations receive a grant.

“We tried to make the entire process as simple as possible,” Stevens said. “We didn’t want a complicated, draining nomination process and we didn’t want an exhausting review or voting system. We wanted to make it simple and fun for all parties.”

And fun it is. Before the COVID-19 pandemic changed everything, the WGC gathered quarterly with beverages and hors d’oeuvres to learn about the nominated organizations and hear from previous recipients about how the funding benefited their group.

“We have a blast,” VanRoekel said. “And when you spend time with 100 other kind, generous, and strong women, you will always leave feeling inspired.”

Although the WGC cannot gather in person during this season of quarantine, this has not slowed the momentum of the group.

“This fall, we will host our Zoom party, and we are providing goodie bags to all of our members and teams so we can try to replicate the fun we had in person,” Stevens said. “And our members are excited to keep the cycle of giving going because the nonprofits in our area need our help now more than ever.”

Just like all forms of philanthropy, the WGC has adapted and evolved during these unprecedented times, and their goal is to continue to do so moving forward.

“We want to grow in whatever way is best for our community,” VanRoekel said. “We are continuing to learn and to work toward making the WGC as diverse and inclusive as possible.”

Ultimately, VanRoekel and Stevens hope to inspire the next generation of philanthropic leaders.

“We have visions of spin-off groups,” Stevens said. “Maybe that’s a young women’s group or a group dedicated toward funding other types of organizations. Our goal is to create and inspire philanthropy in all forms in the community.”

Twenty years from now, Stevens and VanRoekel hope to look back and see the impact the WGC has had in the area, and it’s safe to say that impact will be extensive. In less than two years, the WGC has already given over $57,750 to 21 projects or programs within this region.

“As an accountant, I can say with confidence that the numbers speak for themselves. Your dollars can do so much good when you utilize the power of many,” VanRoekel said. “We hope women in the area will continue to engage in philanthropy in this super unique way, because trust me, you won’t find a more fun way to give.”

To learn more about the Women’s Giving Circle and to join as a member or team, go to mankatoareafoundation.com/programs-and-initiatives/womens-giving-circle.

Your ticket for the: Power In Numbers