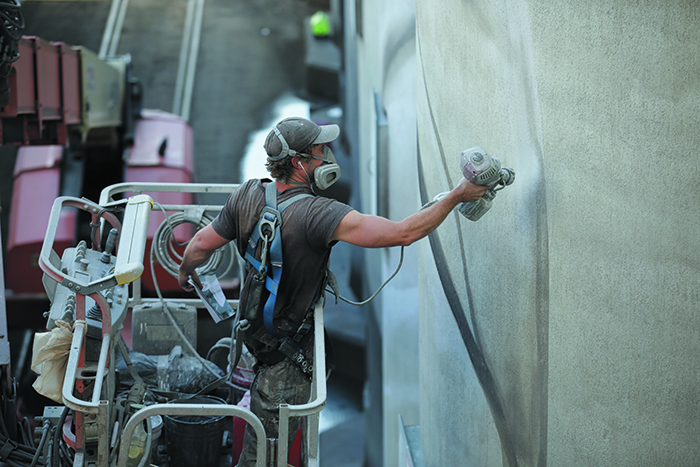 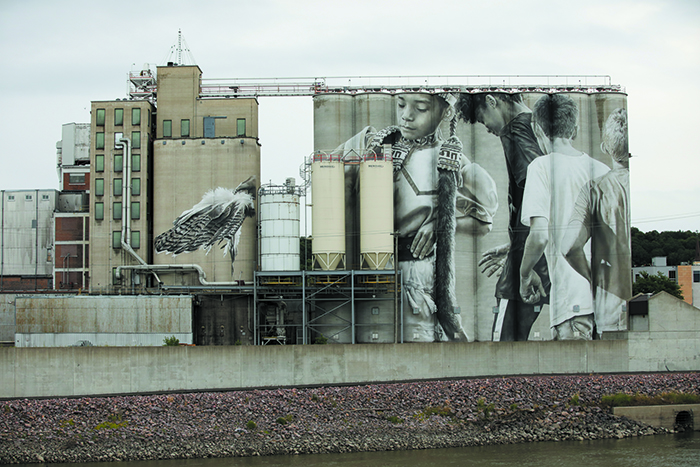 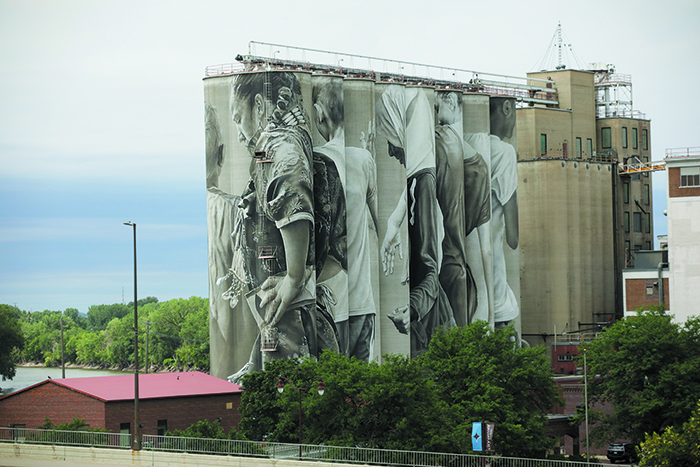 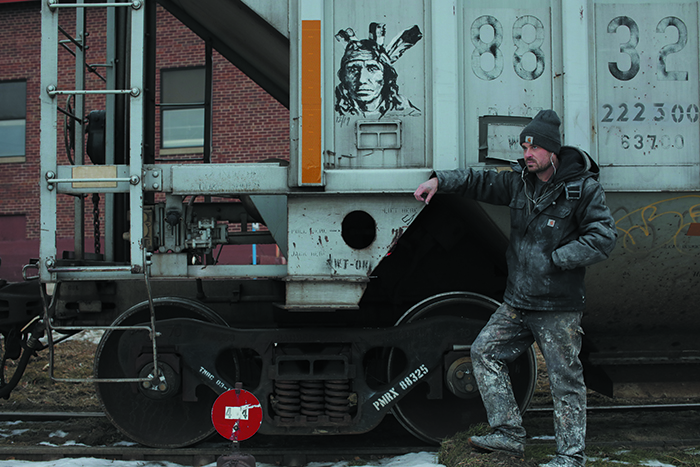 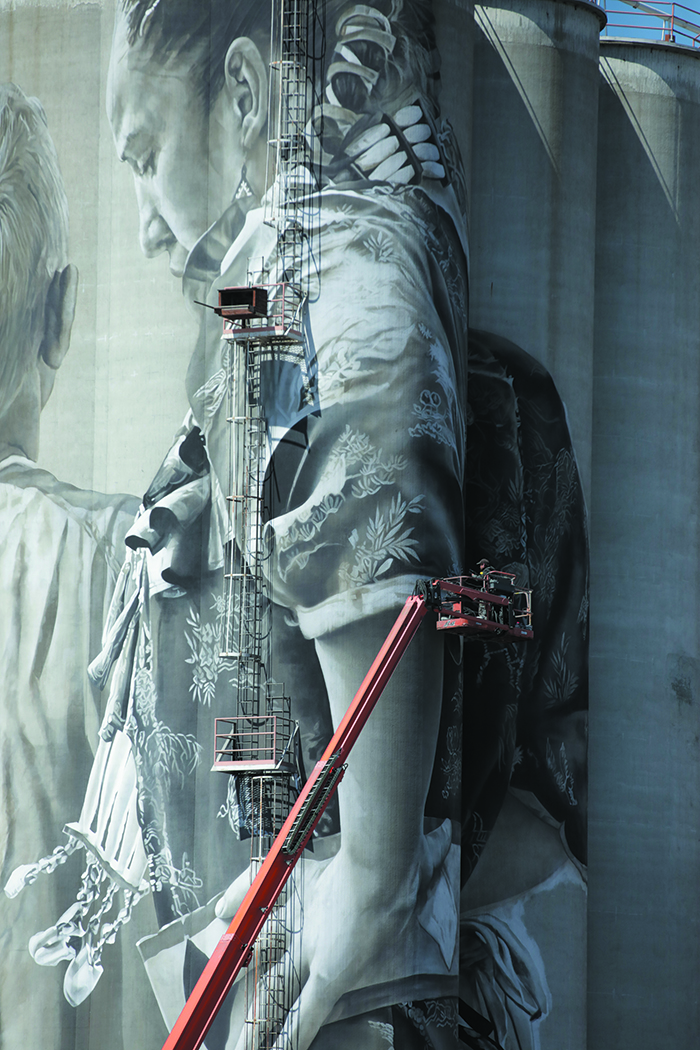 This artwork specifically addresses the existing diversity as a source of pride for the Mankato community. The concept was derived from a summary of experiences and discoveries in colour and culture as part of the Mahkato Powwow and Education Days in 2018 and 2019.

This mural brings together the shared ideals of community, diversity, inclusion, and participation. In consultation with various Native and non-Native community representatives, the artwork took shape and allows for an open interpretation as the viewer takes in all angles in one of the largest murals completed by the artist to date. The artwork is part of a growing trail of monumental murals painted by the artist throughout the Midwest including works in Faulkton, South Dakota and Fort Dodge, Iowa.

It’s not every day you drive by 135-foot-tall children. Unless you’re a Mankato resident, that is.

The Ardent Mills grain silos in downtown Mankato, home to the newest of internationally-renowned artist Guido van Helten’s enormous original murals, feature the likenesses of elementary school students. This way-larger-than-life masterpiece is a celebration of Mankato’s past, present and future; it features local children and adults learning, playing and dancing at the Mahkato Mdewakanton Association Powwow.

“The silos truly capture the diversity and inclusion that’s here, which van Helten wanted to highlight,” said Antje Meisner, a board member of Twin Rivers Council for the Arts. “He kept telling us, ‘Mankato is such a special and unique place. We need to honor that.’”

The concept of turning the Ardent Mills silos into a work of art came out of Envision 2020 and the City Center Renaissance Plan. CityArt—a collaborative partnership between Twin Rivers Council for the Arts and City Center Partnership championed the opportunity to bring the dream to fruition.

“This community has a history of supporting the arts and we felt the silo project would highlight that commitment,” said Shannon Sinning, board chair of Twin Rivers Council for the Arts. “But it wasn’t until we came across this artist’s work that we really kicked the initiative into high gear.”

In 2018, Sinning emailed van Helten after discovering his artwork online, and van Helten responded by the next morning. The artist, who is based out of Australia but lives wherever his work takes him, happened to be working in the U.S. and offered to visit Mankato to learn more.

“van Helten loves the Midwest,” Meisner said. “He loves the history, the people and the culture. And as soon as he saw the silos, he wanted to take on the project.”

“When we realized he was interested in working with us, we needed to figure out how to pay for it,” Sinning said. “We reached out to Nancy Zallek at the Mankato Area Foundation and asked her opinion on whether Mankato would have the interest and capacity for supporting this initiative. I’ve worked with Nancy on other projects and if you know her, you know how much she believes in the generosity of this region. She gave us the confidence to start planning while agreeing to share this opportunity with donors who would want to be involved in this amazing initiative.”

Within months, van Helten was preparing to begin his largest silo mural in the U.S. He is known for his large-scale installations, but each is unique to the culture and identity of its home area. Before a single drop of paint falls, van Helten spends months immersing himself in the local community.

“van Helten was immediately intrigued by both the negative history and thriving future of the area,” Sinning said, referring to the “Mankato 38” of 1862, which involved the hanging of 38 Dakota men and remains the largest mass execution in U.S. history. “He attended the Powwow in 2018 and again in 2019, and this became his inspiration for the silos.”

van Helten captured photos of fifth graders on a field trip to the Powwow, which he then turned into 3D models and eventually the subjects of his mural.

“It became an amazing collaboration between the artist, the Powwow, the school district and the families of the children,” Meisner said. “We tracked down the families, received permission to feature their kids in the mural, and van Helten got to work.”

“It was surreal when he actually started,” Sinning said. “Watching him work is mesmerizing. He stands in a basket on a giant boom lift, glances at his phone to see his digital model and spray-paints at an arm’s length. It’s truly remarkable.”

By the spring of 2020, after a brief hiatus back to Australia, London and Iceland, van Helten was putting the finishing touches on the Ardent Mills silos.

“Guido resumed work just before the COVID-19 pandemic hit,” Meisner said. “But watching him finish the project was truly a bright spot in such a dark time.”
Of course, van Helten could never have stepped onto that lift in the first place if this massive project had not been funded.

“We are so grateful for the enthusiastic support we received from the Mankato Area Foundation and the numerous donors who embraced this significant undertaking. This was the biggest project CityArt had ever taken on, and we knew partnering with MAF would be crucial to making it a success.”

Undoubtedly, every dollar put toward the silo project was money well spent.

“This has put Mankato on the map,” Sinning said. “People are coming here just to see the silos, and they’re learning about the meaning of it and the culture of our community in the process. It’s incredible.”

As for Meisner, the silos represent so much more than paint on concrete.

“This region is so special, I don’t think anything else could ever capture the heart and soul of this community so well,” Meisner said. “Ultimately, I view this as a gift to the people of Mankato, and I hope it is treasured for years to come.”

Your ticket for the: A Mankato Masterpiece