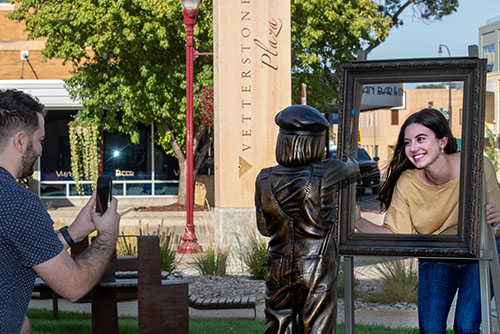 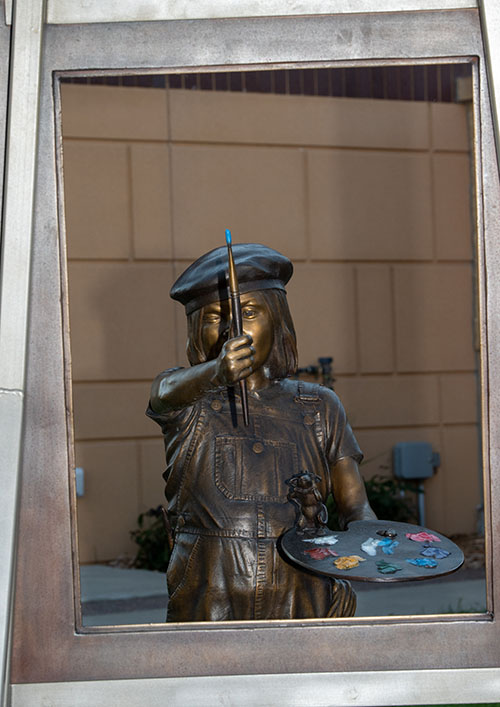 Home Is Where The Art Is

The next time you treat yourself to a stroll in downtown Mankato, you might notice an eye-catching sculpture of a young female painter on the corner of Second and Walnut. You might see folks taking their picture behind its open frame. You might stand behind the little bronze artist to see the world as she sees it—the movement of the city behind the still frame. Before you go, however, take a closer look. Do you notice anything out of the ordinary? Peer down at the artist’s palette. That’s where you’ll find it.

Marian Anderson was born in 1936 in southern Minnesota, and she was raised on farms near Nicollet and Madelia. She grew up to be a self-taught, nationally renowned painter with numerous credits and awards to her name and her art exhibited in galleries and private collections around the world. By the end of Anderson’s career, her original pieces sold for more than $10,000 each. She passed away on January 26, 2021, leaving behind a legacy for generations to come.

But she would never put it that way.

“Marian was an incredibly shy, humble person,” Huebsch said. “She never wanted attention, and she preferred to be a little hidden—like a mouse. That’s why we put it there on her sculpture.”

The sculpture in reference is World’s Her Canvas by Lee Leuning and Sherri Treeby and was originally featured in the CityArt Walking Sculpture Tour in 2015. After Anderson passed away, Marian’s close friends and the Mankato Area Foundation (MAF) decided to purchase and install the sculpture as a permanent memorial in Anderson’s honor. MAF hosted a dedication of the sculpture on June 26, 2021, which both Mankato and North Mankato proclaimed Marian Anderson Day.

Another longtime friend of Anderson, Tom Hagen, agreed that Anderson always preferred the focus to be on the community and not on herself.

“Marian would have hated a whole day about her,” Hagen said, laughing. “It actually rained during the sculpture dedication, and it was the first rain we had had in weeks. I’m convinced that was Marian showing her disapproval of the fanfare.”

According to Anderson’s friends, she was always a giver, both personally and professionally. Her art and her talent were always a gift to others. But because her husband Vince passed away in 2005 and the couple never had any children together, Anderson was challenged with how to prepare her estate before she passed. This was a unique situation because so much of Anderson’s estate was made up of artwork.

Rod Meyer, Anderson’s financial advisor, is credited with thinking outside the box regarding her estate. Anderson wanted the potential and flexibility of benefiting the entire community after she was gone, not just one cause or organization, and she wanted her philanthropy to evolve as the needs of the community did.

Meyer gave Nancy Zallek, MAF President and CEO, a call. The two of them got creative, and together they came up with the Marian Anderson Fund.

There are two components to the fund: Anderson’s original artwork and the ways her financial resources could benefit the community. Anderson made it clear that her original artwork should be out in the community, so MAF has an ongoing partnership with Blue Earth County Historical Society and Nicollet County Historical Society to house and circulate her work. The Marian Anderson Fund of the Mankato Area Foundation will focus on supporting art and aesthetics in the Mankato area.

“Long before she passed, Marian made it clear that her art should not just sit on a shelf,” Huebsch said. “She wanted people to experience it. If someone touches it, it’s not a big deal. She wanted it accessible and out in the community.”

According to Huebsch, Anderson always wanted her art to reach kids like her—those kids doodling in the margins of their notebooks or staring at animals in nature—and to inspire them to express themselves in unique ways as well.

Anderson worked closely with Meyer and Zallek to develop a plan for her fund, and according to Huebsch, it was these relationships that made her feel confident in her planned giving. “

Marian developed a personal relationship with both Rod and Nancy, and that made all the difference for her,” Huebsch said. “She left feeling confident that the Foundation understood and appreciated her vision.”

Marian requested Hagen and Huebsch help MAF by advising the Marian Anderson Fund, which Anderson said should focus on benefiting her home community.

“Marian could have lived anywhere in the world, but she never strayed because this was her home,” Hagen said. “In fact, she didn’t even leave the country until she was in her 70s! Clearly, this community was important to her, and she wanted her legacy to reflect that.”

The duo already have plans for fulfilling Anderson’s wishes for her fund. Not everything has been determined, however, because that’s the way Anderson wanted it.

“If you look closely at her nostalgic paintings, Marian always left a blank space as a symbol of the future,” Huebsch said. “That open space represented the unknown and her wish that this community would continue to grow and evolve. Our job is to make exactly that happen.”

According to Hagen, the beauty of the Marian Anderson Fund is in its undetermined future.

“Marian has given this community the gift of opportunity,” Hagen said. “If we see a need that aligns with her vision, we can just...try it! Just like Marian never had any formal training—she just saw that she enjoyed art, so she tried it. Now she has asked us, as a community, to do the same.” 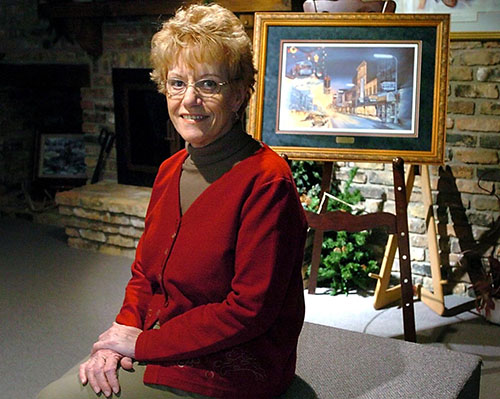 Growing up, Anderson was the quiet girl in the back of every classroom, doodling in the margins of her notebooks. Her family struggled financially, so she never received any formal art training. Instead, the self-proclaimed tomboy spent her youth running around the family farm and painting wherever and however she could. In high school, Anderson received a scholarship to attend a three-day art seminar in Minneapolis, where she saw her first
skyscrapers, took her first ride in a taxi and experienced her first stay in a hotel. That seminar was the highest level of formal training Anderson ever received.

Anderson went on to color black and white photographs for pay, and she drew original commissioned pieces for $25 each. Eventually, however, Anderson’s wildlife paintings caught the attention of organizations like the National Wild Turkey Federation, and this helped launch her career nationally as a wildlife artist.

“This wasn’t without its challenges, however, because she was a woman in a man’s world,” longtime friend Tom Hagen said. “She had difficulty getting accepted as a female wildlife artist, but nature was what she knew. She never let what others said stop her, and she ended up being more successful than any of them.”

Locally, Anderson gained the most attention for her nostalgic paintings. Even today, it is difficult to escape her depictions of old downtown Mankato, Minnesota State University, Mankato, historic homes and more. Prints can be found on walls and in public spaces throughout the entire community. What many locals remember of Anderson, however, was her artist residency programs.

“So many people remember Marian visiting their elementary school for an art workshop,” Huebsch said. “In fact, that’s the first place I met her! It clearly left a lasting impact on me, and I know it did for countless others.”

Some of Anderson’s favorite memories were her school residency programs, and one of her most famous paintings came from such an experience. Circle of Hope features the faces of children Anderson met while leading an art program at a school in Eagle Lake, Minnesota, and prints of this painting were sent to every school counselor in the United States.

“Wherever this print is displayed, my wish is that these children be a reminder of the importance of diversity and hope in achieving a future of unity,” Anderson had said when the prints were distributed. “Marian was an inspiration,” Tim Huebsch said. “The priorities she exhibited in life will be the priorities of her fund. Tom and I are honored to be working with the Mankato Area Foundation as a way to continue her legacy in this community.”

Your ticket for the: Marian Anderson