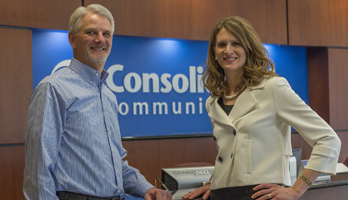 Amid all the changes that John Finke was thinking about when Enventis was purchased by Consolidated Communications in 2014 was the question of what to do with the company’s foundation.

Back in 1963, when the Mankato-based business was still known as Mankato Citizens Telephone Company, its leaders created a foundation to provide financial support to local organizations. Over the next 50-plus years, that Community Fund provided more than $5.3 million to nonprofit programs and initiatives that had a positive impact on the communities the company served.

Finke, who was the CEO of Enventis when the purchase was announced, knew that it would be critical to continue that legacy of giving to the Mankato community even when the company was no longer headquartered locally.  He understood how important the foundation was to the employees, who had always been part of the distribution process and who were able to tap into matching funds for organizations they supported as well.

“We wanted to find a place for the foundation that would allow our company and our employees to have an influence on where the money was going—and that would continue the legacy of giving in the community,” Finke says.

Converting the Community Fund to a donor-advised fund within the Mankato Area Foundation made sense. It allowed the company’s internal committee—which includes Finke, who is now retired, as well as another retired executive and four current employees—to provide direction about where the annual grants should be distributed. It also allowed the fund to stay local, and even opened up new opportunities to learn about local organizations that might be worthy of grants.

“We benefit from the Mankato Area Foundation’s knowledge base and from sharing information with them,” says Jennifer Spaude, senior director of corporate communications for Consolidated Communications. “We’re able to better understand what might be a duplication of efforts and find a better way of linking what we do in the community.”

Just as the the decision to keep the fund local was intentional, so was the decision to rename it when Enventis became Consolidated Communications last June. “It was important to us that our parent company was recognized in the process as well, which is why we changed the name to the Consolidated Communications Community Fund,” Finke says. “It’s important to recognize that the company is at the forefront.”

Throughout its 100-plus year history in Mankato, the company has developed a culture of giving and community involvement among its employees. Employees are encouraged to volunteer and are given opportunities to do so as well. The organizations that matter to them are often the beneficiaries of foundation gifts; the foundation matches not only a portion of the financial gifts they give but also the time they spend volunteering.

“It’s part of the everyday culture at the company,” Finke says. “It’s part of the values we hold as a company. But you have to back those values up by allowing the employees to do it, by giving them an opportunity to do those things.”

Transferring the administration of Consolidated Communication Community Fund doesn’t change any of that. If anything, it allows them to focus even more on opportunities to give, since the committee no longer has to manage the investments.

“I feel very privileged to be part of this,” Finke says. “Not just because of what it’s done in the past, but also for what the fund will be able to do in the future for this community. This company has been an important part of this community throughout its history, and that will continue to be the case.”

Your ticket for the: Consolidated Communications