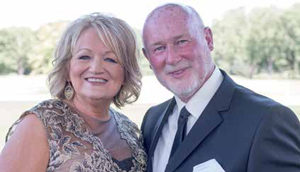 David Christensen and Jill Evans used appreciated stock to start a donor advised fund with the Mankato Area Foundation—and are now using it to help support their passions.

When David Christensen retired almost four years ago, he and his wife, Jill Evans, started thinking about the legacy they’d leave when they were gone. They quickly realized that they didn’t want to wait that long to have an impact on the causes that mattered to them—and that they were blessed to be in a position to do so.

So, the couple used appreciated stock to establish a donor advised fund with Mankato Area Foundation (MAF). David had served on MAF’s board of directors on two different occasions, so he was very aware of the Foundation’s ability to accept appreciated stock as well as facilitate their philanthropy.

“We originally thought it would be something we would do much later on,” Christensen explains. “But that thinking changed. We had the means to do it differently, and we found projects that we became very passionate about.”

Those projects—the Children’s Museum of Southern Minnesota and renovation of Minnesota State University, Mankato’s hockey space at the Verizon Wireless Center—offered an opportunity for David and Jill to pursue different passions together.

While they were both working, they maintained separate finances and made donations independently. In retirement, however, they welcomed the chance to work as a team.

“When we were working, we just didn’t have the time to do it all together,” Christensen says. “But in retirement, we do most of it together—volunteering, sitting on boards and writing checks.”

When they decided to give a significant gift to the Children’s Museum, they both arranged to meet with Peter Olson, the former director of the museum, at a coffee shop. Evans remembers that when they told Olson about their intended gift, he was moved to tears—and then so was she. “It was just an incredible feeling to know that we were able to solve a problem for him,” she says. “I told him that as good as he felt, I felt a million times better.”

“That experience really drove home how important it is to be doing it together,” Christensen says. “It’s so powerful to get passionate about the same things. That was a great moment—we’ll never forget that day.”

Donating to the Mavericks’ hockey program was similarly important to both of them—but for different reasons. Christensen, who has been a season-ticket holder since day one, had the opportunity to meet with coach Mike Hastings.

“He showed me around and spent two hours with me,” Christensen remembers. “Then he said, ‘There’s a big need here. If we are going to keep up with the best programs, we have to take it up a notch. Can you help me raise the money to do that?’”

Evans, who says she appreciates what Mavericks hockey means for the community, agreed that they should provide the lead gift for the renovation project. “I’m doing it for different reasons, but we both thought this was a perfect project,” she says.

They also agree that funding their charitable giving with appreciated stock is a win-win. It has significant tax benefits for them; in addition to not paying capital gains taxes from selling the stock, they are able to take a charitable donation write-off for the stocks’ current value—which is much higher than it was when they purchased it.

“Everybody wins,” Christensen says. “It’s a marvelous vehicle for giving. And the Mankato Area Foundation is able to convert it into cash, which works well for them.”

Evans, who spent 16 years raising funds for nonprofit organizations in southern Minnesota, knows that tax benefits are important—but she also knows that they are only part of the reason that people give.

“Research shows that tax advantages are not the real reason that people give,” she says. “They have to want to give. They have to get why they are doing it. The tax implications are important, but they aren’t everything.”

“We chose to work with the Mankato Area Foundation for a few reasons. First, they have the infrastructure in place to handle non-cash assets. Not only was the Foundation prepared to accept this kind of gift, they made it really easy for us. Secondly, it was very important to both of us that we work with an organization that values our philanthropic goals. We spent a lot of time talking with MAF about our immediate gifts as well as our future charitable giving.”

Christensen and Evans have both expressed how wonderful it is to have a local organization whose mission it is to help donors leave a legacy to a community they love. “We appreciate the Foundation’s willingness to work with us as we find those projects and programs that align with our passions.”

Your ticket for the: David Christensen and Jill Evans