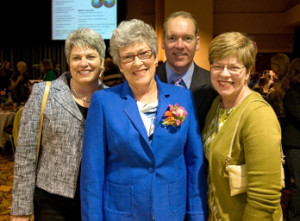 The Page Jones Richards Fund maintains its focus on family priorities, even as part of the Mankato Area Foundation.

Sarah Richards has one word for why her family decided to convert their foundation to a donor-advised fund run by the Mankato Area Foundation: trust.

“You have to be able to trust that whoever is managing it will manage it right,” she says. “You have to know that names will be spelled correctly and that dollar amounts won’t get changed. Those things are important. And this is what the Mankato Area Foundation does. It’s the business that they are in, so they know how to do it well.”

Richards in one of four people who advise the Foundation on the distribution of the Page Jones Richards Fund; her mother Marcia Richards, her sister Jessica Richards-Palmquist and her brother David Richards are also involved. The four of them have each been responsible for designating certain portions of the fund for almost 20 years. They made the decision to house the fund with the Mankato Area Foundation in 2015.

“When we began the conversation with the Foundation board, they pointed out the strengths that they bring to the table,” Sarah Richards says. “And those strengths resonated with us.”

One of the biggest selling factors was the local nature of the Mankato Area Foundation. When Marcia Richards’s mother, Mildred Jones, established the fund in the late 1990s, Marcia asked her children to help draw up the guidelines for how to distribute the money—and they agreed to focusing on education, children, women and women as entrepreneurs and social concerns. But Marcia added an additional component to those guidelines.

“I wanted all of us to do at least some of our giving in the communities in which we live,” Marcia Richards says. “To make it meaningful, each of them needed to give some where they might be better able to see the direct impact.”

Sarah and Marcia Richards both currently live in the Mankato area and support several local organizations. David Richards lives in Lake Crystal and designates much of his portion there. Jessica Richards-Palmquist lives in Fort Collins, Colorado, which is where she distributes her portion as well. The Mankato Area Foundation is able to accommodate all of that.

“We like to do things where we know the dollars will be able to stay 100 percent local,” Sarah Richards says. “We want to know that we are going to be able to have an impact on the needs we want to impact.”

One of the other benefits that resonated was the fact that should the day come that no family members are around and able to direct the fund, the Mankato Area Foundation is prepared to continue distributing gifts in their name. “It is good to know that when the current family members are no longer living or local, the Foundation will know what to do with it,” Sarah Richards says. “We know they know what’s important to us.”

Working with the Mankato Area Foundation has been so easy that the Richards would recommend it to other family foundations as well. They appreciate the way their fund has been handled and the professionalism that the Foundation has shown in handling the fund as well. They also appreciate the opportunities the relationship creates for collaboration.

“It’s nice to be able to direct people who want to request gifts directly to the Foundation,” Marcia Richards says. “That way, if it’s not a request that fits our criteria, the Foundation can make recommendations about other funds that might be better fits. So it benefits everyone.”

Your ticket for the: Page Jones Richards Family