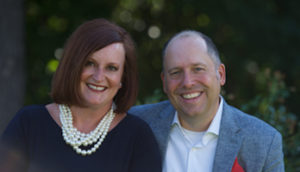 Starting with a Scholarship

Michelle and David Schooff established scholarships with the Mankato Area Foundation in 2013—but they expect to do more as time goes by.

When Michelle Schooff’s dad died in 2013, she knew exactly how she wanted to memorialize him: with a scholarship given in his name each year. And Michelle and her husband David knew exactly how they would create that scholarship, as well another in honor of David’s father: through funds set up with the Mankato Area Foundation.

“We thought the scholarships were a great way to start our fund and give back to our community,” Michelle said.

The two scholarships they’ve established are just a start. Their intention is to grow their fund in the years to come.

“We started small,” Michelle said. “But we have been able to increase the amount given in the scholarships every year, and we plan to continue growing our funds over the years as well. It was important to us to get it started—even though we didn’t have a million dollars to start it with.”

“The truth is, you don’t need anywhere near that much,” adds David. “You can start it at whatever amount you can and then contribute to it each year.”

Although many people wait until they’re near retirement or even finalizing their will to think about establishing such funds, the Schooffs began the process when they were in their late 30s. Now they encourage their peers to start thinking about doing the same thing, sooner rather than later.

“We would challenge anybody our age to do this,” David said. “When you start early, you can have a bigger impact over time.”

Already, David and Michelle have been able to see the impact they’ve had on the recipients of their scholarships. Michelle, who travels to her hometown of Adams, Minn., each spring to present the award, especially enjoys calling the student to tell them the good news. Because the criteria for that scholarship is geared toward students who are going into an agricultural-related field rather than the highest achieving students, the recipients usually aren’t receiving several other scholarships.

“This year, when I called the kid we had selected, his response was, ‘Are you serious? Seriously? You picked me?’” she said. “For me, I always try to think about who my dad would have picked. And when I go down and present it, it’s a very emotional, sentimental and cool day.”

The scholarships, David and Michelle agree, are a first step for them.

Your ticket for the: Michelle and David Schooff